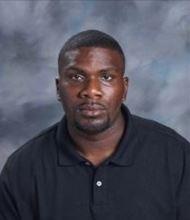 Mr. Jackson attended Midwestern State University in Wichita Falls, Texas from 2000-2003 and earned his bachelor's degree in Business Administration. Additionally, he earned his Master's Degree in Secondary Education from the University of Phoenix in 2010.

Mr. Jackson is a native of Huntsville, AL. He has been a resident of Madsion County for 37 years. He is a proud husband of Mrs. Shameka Ford Jackson, and proud father of 2 boys. Both of Mr. Jackson kids are part of the Madison City School's family and thrive in the classroom and on the sports field at Bob Jones High School. Mr. Jackson spends his off time engaging in more coaching and traveling with his family to various sporting events they may be engaged in. Mr. Jackson loves to see his students achieve what they think is impossible. Mr. Jackson doesn't think the sky is the limit, because there is too much evidence that proves you can go further. Dream Big, but Live Bigger.