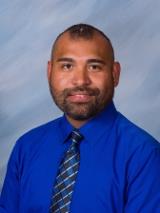 Karl Fernandez, originally from the Pacific Island of Guam, took up residence here in the Huntsville area back in 1999 as his father was in the U.S. Army. His passion for education was realized at a very young age and was pursued through his undergraduate attendance to Calhoun Community College and Athens State University, followed by his graduate attendance at the University of West Alabama, Samford University, and now the University of Alabama, where he is currently working on his doctorate degree in Instructional Leadership.