The RFCU-MCS partnership comes with an added benefit for Madison City Schools. Each transaction with a special free RFCU "Affinity" debit card helps fund safety and security throughout the district.

Newberry said planning started a couple of years ago and RFCU now has branches in four North Alabama high schools. The James Clemens branch could be operating some time this year.

The Bob Jones branch has been busy since opening last September. It is student run under the supervision of BJHS teachers Brandy Van Dam and Kristy Wheeler.
Two RFCU employees from the U.S. 72 branch, Corinna Nicole and Tyler Dalton, serve as liaisons.
Learn more about the new RFCU branch at Bob Jones in this Patriot Pages news article.

Current RFCU members are not eligible for the $200 but can obtain a free Affinity debit card from any RFCU branch to start steering money from each transaction to MCS.
Redstone Federal Credit Union wil pay the school system 10-cents for each transaction on the Affinity card which should bring thousands of dollars for district safety and security improvements. 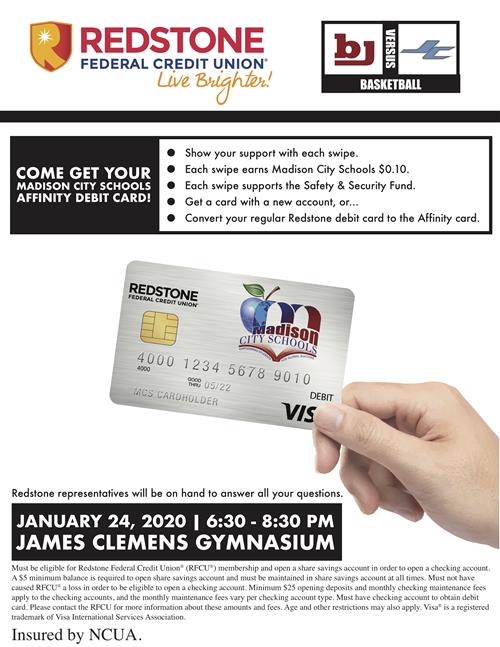