Buying local not only keeps the money in the local economy, it can also result in more nutritious produce. Food trucked from storage warehouses can lose some of their freshness and nutritional value. The challenge, however, is establishing a timely harvest-to-delivery system that is cost effective. 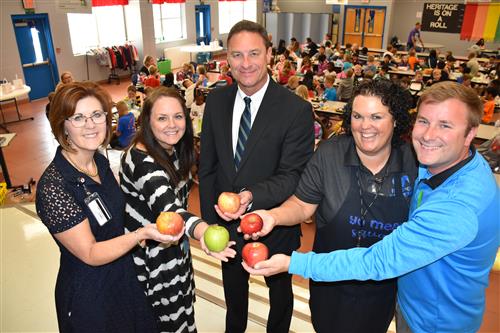 Officials with the Alabama Department of Agriculture, Farm Food Collaborative and local apple producer Scotts Orchards visited Heritage where apples from Scotts were on the menu.

Heritage students had their choice of several apple varieties that were marked in the serving line. Will Scott from the orchard company fielded questions about apples on how they are grown, number of varieties (18 at Scotts and 7,500 worldwide), how many trees at Scotts (150,000), why apples float (25 percent air), number of seeds in apples (5) and others.

The Farm-to-School program was launched several years ago, with Madison City Schools serving as a pilot. It has been growing statewide ever since with MCS widely touted as a state leader.
Among the locally grown produce now on MCS menus regularly include strawberries, peaches, melons, sweet potatoes, blueberries, Satsuma oranges, cantaloupe, apples and more.