West Madison Elementary has a new principal who certainly is no stranger to the school.
The Board of Education approved Rainbow Elementary Assistant Principal Savannah Demeester as the new principal.
Ms. Demeester is a proud product of Madison City Schools, attending from kindergarten starting at WMES and ultimately graduating from Bob Jones High School.

Her teaching experience began at Columbia Elementary where she taught 1st, 3rd and 5th grades. She returned to UAB to complete her Master's in Educational Leadership and entered the MAAP (Madison Aspiring Administrators program) which grooms educators in MCS for future administrative roles.She was a MAAP at Rainbow before taking the assistant principal post.
Ms. Demeester holds her undergraduate degree from UAB in Early Childhood and Elementary Education and a master's degree from UAB in Educational Leadership.

Superintendent Dr. Ed Nichols said Ms. Demeester is believed to be the first principal of a Madison City Schools that went all the way through MCS schools as a student. Dr. Nichols mused that many in the MCS administration have stepped forward trying to claim credit for her success.
"In many ways, in transitioning to this new role, I feel as if I am just returning back home," Ms. Demeester said at the board meeting. "I'm really hopeful to build upon the success and hard work that has been established at West Madison by the administration, teachers, staff, parents and students. I am so grateful for this opportunity. We're going to do awesome things at West Madison. The best is yet to come." 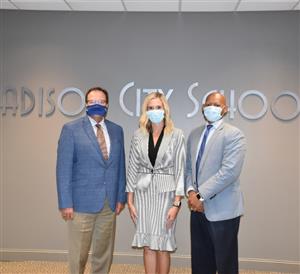