Ms. Lee attended Madison City Schools for all 13 or her school years, During her time at James Clemens, Yewon was selected as 1 of 52 students in the U.S. for the Research Science Institute (RSI), a summer academic research program sponsored by the Massachusetts Institute of Technology. She was also recognized with a grand award in biochemistry at the International Science & Engineering Fair, qualified multiple times for the American Invitational Mathematics Examination and U.S. National Chemistry Olympiad, and was named as a National Merit Scholarship winner. Yewon plans to attend Harvard University in the fall.
Aubteen is a lifelong resident of Madison and has attended MCS schools since kindergarten. 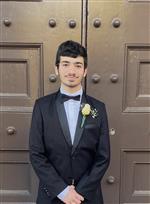 He said service is a large part of his life, evidenced by serving as fundraising chair of the United Way Youth Leaders Council of Madison County, President of the Bob Jones Math and French Honor Societies, and captain of Bob Jones's Debate Team. With acceptance to some of the top schools in the nation, he hopes to pursue an undergraduate degree in political science or public policy before entering law school. "My long-term goal is to be in a position where I can give back to Alabama by helping advance the quality of life in our state," he said.
The list of 2022 semifinalists and information about the U.S. Presidential Scholar program can be found in this link:
https://www2.ed.gov/programs/psp/index.html
Copyright © 2002-2022 Blackboard, Inc. All rights reserved.