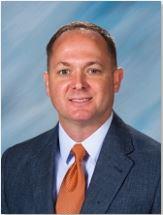 Mr. Franks is an experienced teacher who began his career with Huntsville City Schools in 2000. He taught World Geography at Huntsville Middle School and U.S. History at Huntsville High School. He also served as a coach at his respective schools, coaching basketball, track and baseball. Mr. Franks also has experience in school administration; he has served as an assistant principal in both Huntsville City and Madison City Schools since 2014. He transferred from Heritage Elementary to Discovery Middle School for the 2019-2020 school year.

Mr. Franks is a native of Madison County and currently resides in Huntsville, Alabama. He has one dog (a German Shorthair Pointer) and is an avid Auburn University Tigers fan; War Eagle!