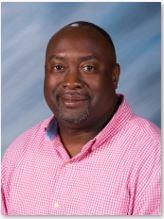 Mr. Griffin attended Alabama A&M University where he earned multiple degrees.  Those degrees include a Bachelors of Science in Mechanical Engineering Technology as well as Mechanical Drafting and Design Technology.  After 13 years of experience in the engineering field, in 2016 Mr. Griffin earned a Masters Degree in General Science Education.

Mr. Griffin worked for Boeing as an engineer scientist for 10 years.  After his stint with Boeing, Mr. Griffin moved overseas to an island called Kwajalein and worked as a Hardware Engineer for almost 3 years.  Immediately upon arrival back to the CONUS, Mr. Griffin began coaching football and track and in 2014 coached at Bob Jones High until present.  As a formal instructor, Mr. Griffin was hired in 2016 at Discovery Middle School to teach STEM, Flight and Space, Medical Detectives, and GreenPower.